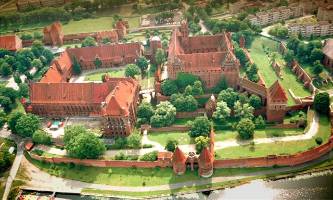 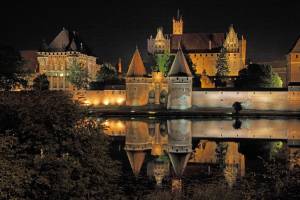 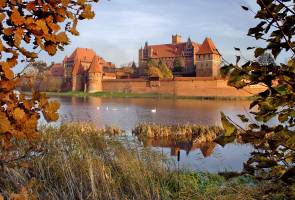 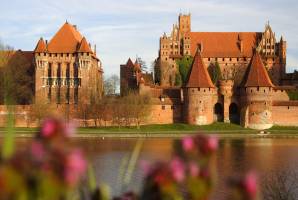 Malbork Castle is a masterpiece of defensive and residential architecture of the late Middle Ages. The largest gothic castle complex in the world with an area of about 21 hectares. It is considered to be the largest brick building erected by human hands.
In 1309 it became the seat of the great masters of the Order. As the capital of the monastic state in Prussia, the castle became the main center of diplomacy, military, economic and religious center. In 1457 it was bought from the Teutonic mercenaries and passed into the hands of King Kazimierz Jagiellończyk. From then on, for over three centuries, the stronghold played the role of a temporary residence of Polish rulers, a military base in Royal Prussia and the seat of starosts.
Today, the fortress on the Nogat River houses the Castle Museum in Malbork, established in 1961.
It is a multi-section historical and artistic museum, the organization of which was mainly subordinated to the matters of reconstruction, proper maintenance and development of the castle.
Parallel to these works, the museum conducts research in the field of archeology, history of art and culture, mainly based on its collections. Numerous exhibitions give wide publicity to the Museum, incl. amber masterpieces, medieval sculptures, stained glass exhibitions, exhibitions of weapons and weapons, and beautiful interiors.
In addition to its core activities, the museum is involved in the organization of symposia, meetings of professional groups and conferences. On special orders, workshops, gala dinners and feasts are also organized in the castle interiors. Additional attractions after the end of the conference are: night tours of the castle, concerts of early music, demonstrations of knight fights and castle adventure games.